All profit from Lobster Shack goes to Diabetes UK, in the name Michael Lewis, brother of Lobster’s keyboard (Nathan Lewis), who tragically died at the age of 20 last year. Michael was a huge supporter of Lobster’s music from the get go, so this gig is to honour his memory, and his contributions made to the band, and to celebrate the chance to unite Birmingham’s best reggae contemporaries and historic legends in his name. 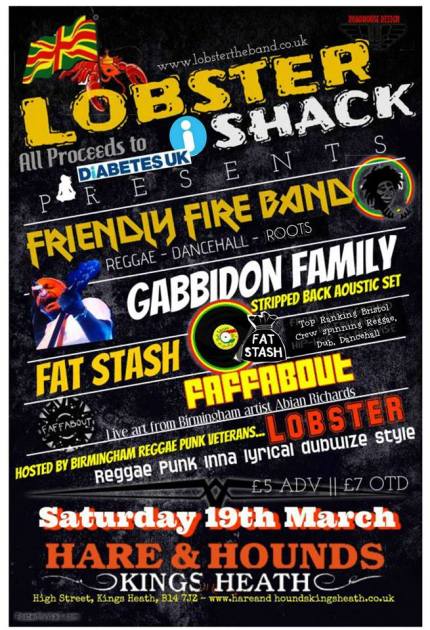 Lobster:
They’ve been gigging around Birmingham since 2009, before some of them were old enough to drink in the venues they were playing –  bringing a mash up of reggae, punk, ska and hip-hop, and, after a recent winter sabbatical, are back in 2016 with a brand new Lobster shack with their strongest line up yet. Lobster released their long overdue EP, Blotto’d, named after Blotto Studios last year. Lobster are quite literally, one of Birmingham’s most hard working reggae groups, skanking guaranteed.
Lobstertheband.co.uk
Brumtownlobster.bandcamp.com
www.facebook.com/brumtownlobster

Friendly Fire Band
Friendly Fire Band have become synonymous with the Birmingham reggae scene. If you shout “Marijuana, legalise it, government and politicians criticize it,” loud enough in the PST Club in Digbeth or just about anywhere Moseley it’s likely you’ll get the response of “Marijuana, can cure the sick, if you don’t believe me go on the internet and Google it,” from a fellow reggae junkie. They’ve become veterans and also form a integral part of Birmingham’s longest running reggae night Jam Jah, while also frequenting festivals such as Boomtown Fair, Shambala, and One Love Festival. Definitely the highest calibre reggae group Birmingham can boast.
www.friendlyfiremusic.com/artists/friendly-fire-band
www.friendlyfiremusic.bandcamp.com

Gabbidon Family
Basil Gabbidon made British reggae history as a founding member of Steel Pulse, a key player in the iconic 1978 Handsworth Revolution album. Basil released a further three albums with the group before leaving in 1981. Basil Gabbidon will perform a stripped back acoustic set alongside his with Catherine and daughter Candice. For fans of Steel Pulse and those wanting to hear Birmingham reggae history, look no further.
Gabbidonband.com

Bristol’s Fat Stash will also be bringing heavyweight sounds on the sound system between and after acts for good vibes and to satisfy your lust for grooving, while Birmingham artist Faffabout returns to Lobster Shack to create live artwork in the venue, keeping the vibe creative and colourful.

Lobster Shack is live at the Hare & Hounds, Saturday March 19.
Tickets –  £5 in advance, £7 OTD.
Check out the Facebook Page for more info